You are here: Home / Work / the nightmare room / projections and ideas

‘The Nightmare Room’ is a multi-platform projection work originally commissioned for the 2012 Blinc Digital Arts festival in Conwy.

It uses site-specific material, animation and augmented reality to examine ideas of transformation and the power of myth.

The 3-channel triptych was projected onto Conwy Castle from 26th to 28th October, 2012.

The Blinc 2012 festival was dedicated to the centenary of Alan Turing, who is well known as the cracker of the enigma code and for his groundbreaking work in computing and artificial intelligence. Turing also produced an equally seminal body of work concerned with mathematical biology and pattern formation, specifically morphogenesis and the occurrence of Fibonacci numbers in plant structures.

These studies provided the initial inspiration for the project, and through research, gradually a narrative emerged that I wanted to explore in the work.

Turing was also an athlete, nearly qualifying for the 1948 Olympics. Around 1950 he encountered another runner out training (which was fairly uncommon at the time) and the two teamed up to become regular jogging partners, this was the young classical scholar Alan Garner.

Writing in 2011, Garner recalled how Turing obviously ran to think, talking endlessly about mathematics and biology. As they chatted they discovered a shared common experience; both had been traumatised at an early age by the Witch’s transformation scene in Disney’s Snow White. The 3-year-old Garner had been dragged screaming from the auditorium, and Turing regularly gave seminars on the psychology of the film at Cambridge.

Garner remembers Turing’s obsession with this story, “He used to go over the scene in detail, dwelling on the ambiguity of the apple, red on one side, green on the other, one of which gave death…… We discovered that we had both realized independently that quite often life and death are the same thing, beauty and evil are the same thing.”

In 1952 Turing was found guilty of ‘Gross Indecency’ i.e. homosexual activity, he lost his security clearance and was forced by the state to undergo a years course of hormone ‘treatment’ with synthetic oestrogen.He died two years later from cyanide poisoning, ending his life with a half eaten, possibly poisoned, apple by his bedside.

Garner went on to produce numerous striking works of fiction, rooted in place, myth and language. Among them is ‘The Owl Service’, a modern updating of the Blodeuwedd myth:

The original story from the Mabinogion tells how Gwydion uses the flowers of the Oak, Broom and Meadowsweet to conjure the maiden Blodeuwedd as a wife for Lleu Llaw Gyffes. She falls in love with Gronw Pebwr and they conspire to murder her husband, Gwydion punishes her by transforming her into an Owl.

In Garner’s work the three protagonists find themselves trapped in a remote Welsh valley and forced to play out roles from the ancient tale.

Central to the plot is a dinner service on which the intricate floral pattern can be seen as either owls or flowers, depending on your viewpoint, the chosen perspective determining destruction or salvation. This duality echoes Turing’s musings on the apple – one half giving life and the other death. 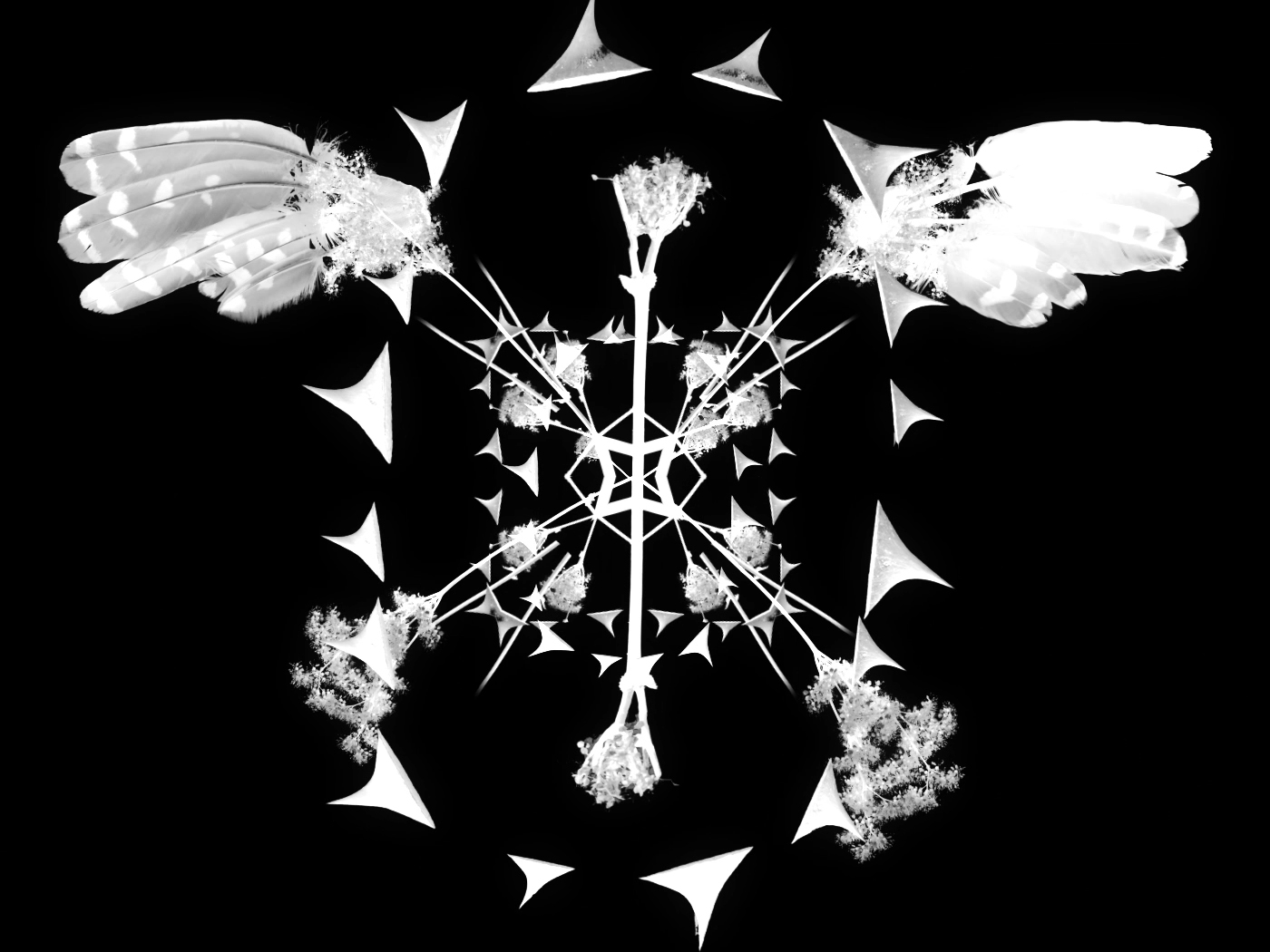 While working on ‘Lament ‘ I had reacquainted myself with Garner’s work, his psycho-geographic essays about Alderley Edge particularly resonating with the sense of place and belonging I feel for the Shropshire border landscape. And just as Snow White disturbed Turing and Garner, I was equally haunted as a child by the TV dramatisation of The Owl Service. A strange adaptation shot on location in North Wales, Garner himself suffering a breakdown during the filming.

It struck me how reoccurring themes of pattern and transformation seem to wind through the narrative arc of Turing and Garner’s life and work.

In an attempt to make sense of these different ideas I started to combine them in ‘The Nightmare Room.’ This was Turing’s name for the tiny space in his Wilmslow home where he conducted chemical experiments, including the gold electroplating of spoons – a process that requires a solution of potassium cyanide. 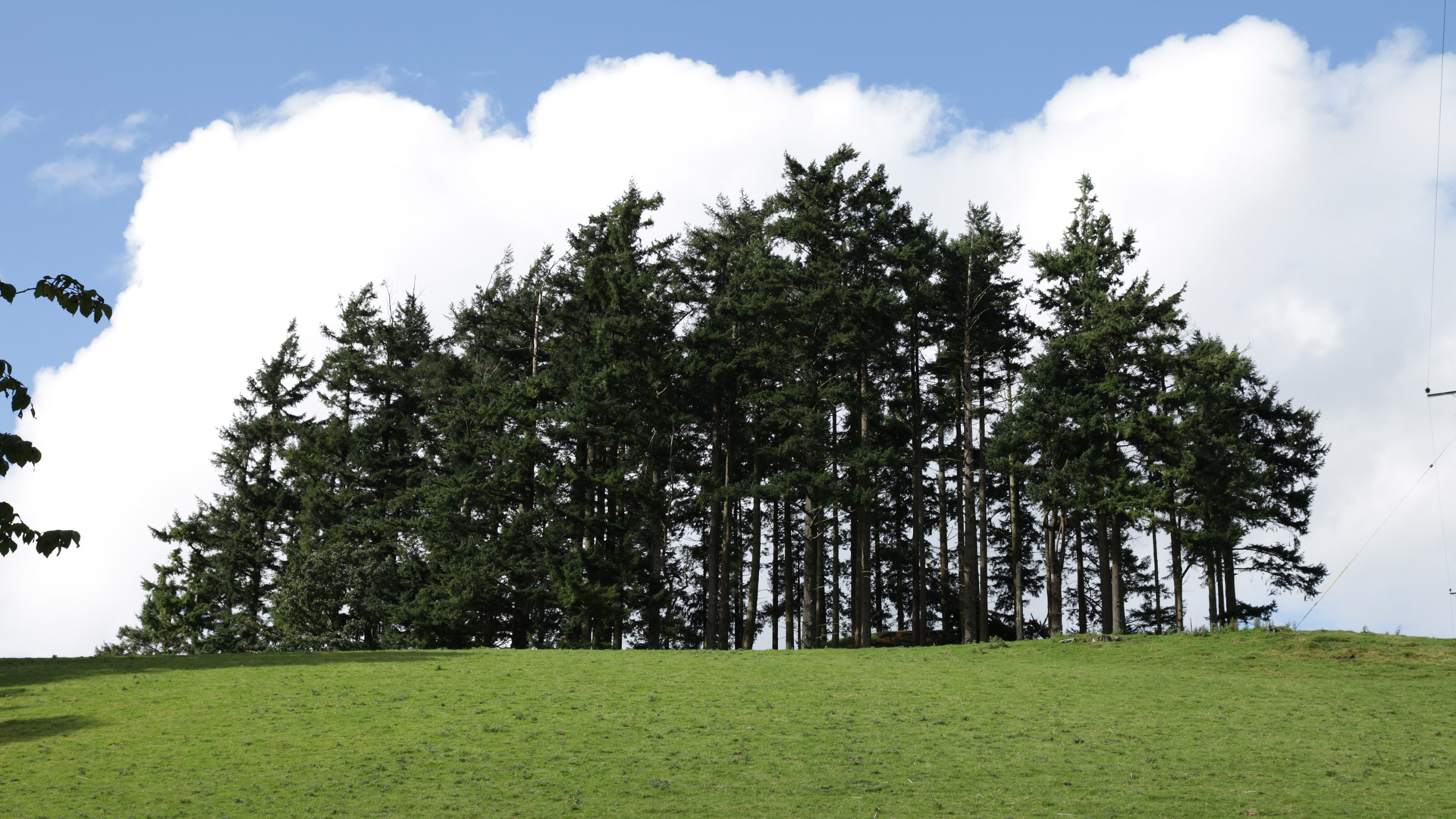 I travelled to Llanymawddwy where Garner wrote the original novel, also used as the filming location for the Owl Service TV series. Here I gathered materials to work in the studio: audio, photos, video and Meadowsweet from the banks of the river.

Inspired by Turings work on phyllotaxis I used a mixture of stop motion and digital animation to breathe life into my found objects. I let shifting patterns evolve, as if mapping out the binding threads that form the narrative fabric of our lives.

Animating Meadowsweet in the studio 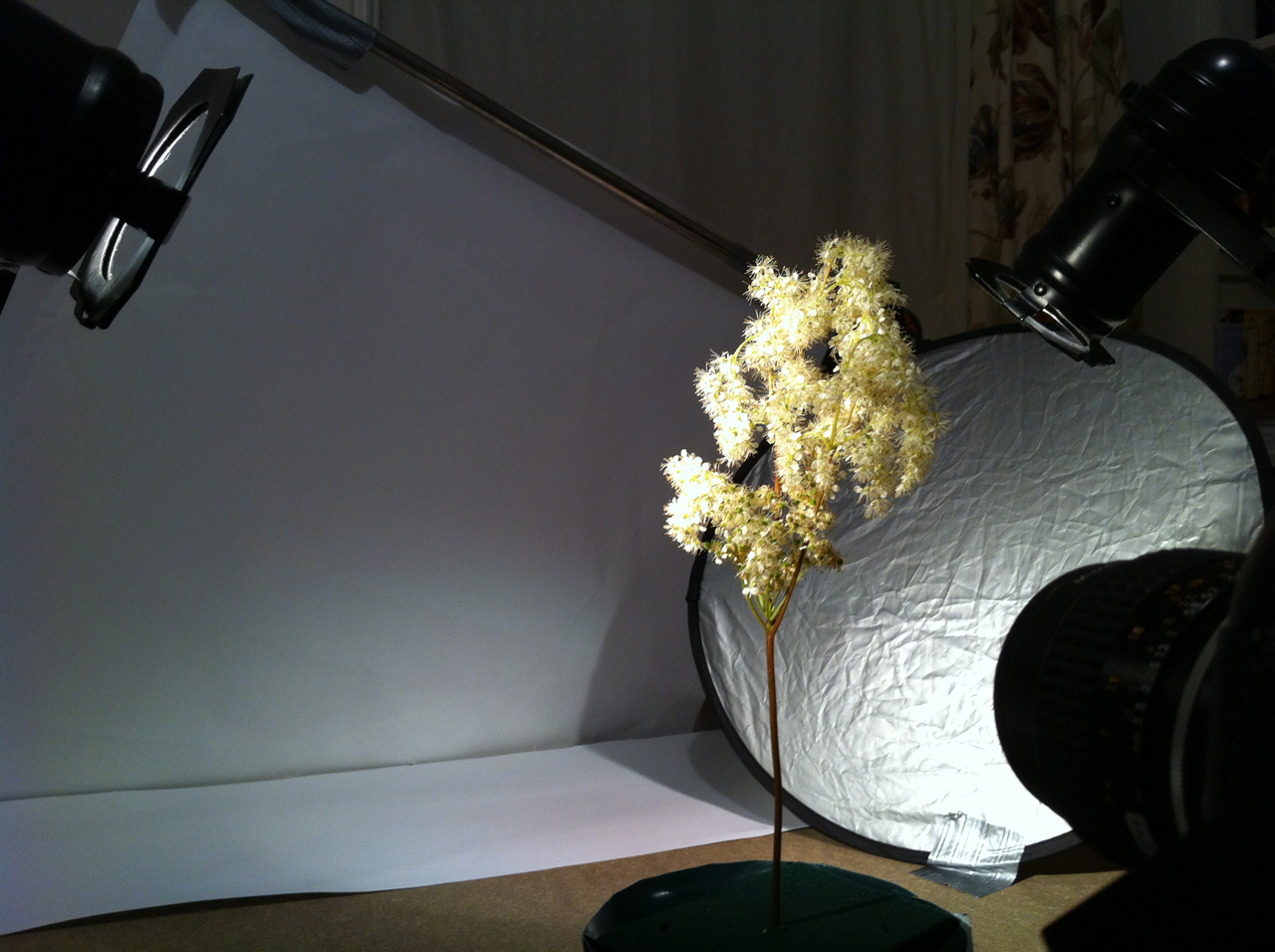 Whereas Turing’s equations can explain the complex shell patterns generated by molluscs as a chemical memory, this theoretical web of connectedness is too vast and complex for us to describe with current mathematical models. In his paper ‘Computing Machinery and Intelligence’ Turing pondered how knowing the initial state of the universe could enable us to predict all future events, but cautions  “The displacement of a single electron by a billionth of a centimetre at one moment might make the difference between a man being killed by an avalanche a year later, or escaping.”

This proto-chaos theory leads on to his discussion of discrete state machines, and theoretical computing. Again, how things are perceived initially can mean the difference between survival and ruin, or as Huw Halfbacon says in the Owl Service:

“She wants to be flowers but you make her owls, you cannot complain then if she goes hunting”

The project presented another welcome opportunity for collaboration with Steve Knight, and for us to build on the Augmented Reality work we had produced in Lament.

We decided to create a number of site-specific AR interventions that would be visible through a smartphone AR browser. Referencing Garner’s and Turing’s joint fascination with Snow White, we built giant ‘virtual’ animated apples, one half green and one half red, all in various states of decay.

While I assembled flowers and feathers frame by frame in the studio, Steve experimented with generative sounds driven by the Fibonacci sequence.

These were combined with recordings we’d made of musicians Ceri Rhys Matthews, Ceri Jones and Christine Cooper.

The soundtrack was then rearranged so that, together with some clever coding, we could use it to ‘drive’ parts of the animated stop-motion movements, directly linking them to values in the audio waveform.

After a site visit to Conwy I realized that the subtle images we had been using would be lost when projected onto the rough stone façade of the castle, so we decided to create a high-contrast monochrome version of the work.

This was projected onto the Castle as a triptych and alongside it we placed our site -specific augmented reality intervention, we did the same with our work-in-progress piece at Conwy Chapel. This let the viewer interact with the AR work whilst simultaneously viewing the projection pieces, so that the two elements combined into one.

Augmented Reality and Castle projection as viewed through smartphone

The work was designed so that each element could also be experienced separately, this was essential for accessibility as not all the audience would possess a smartphone or they may have encountered the AR during the daytime when the projection wasn’t running.

The Nightmare Room: Work in Progress 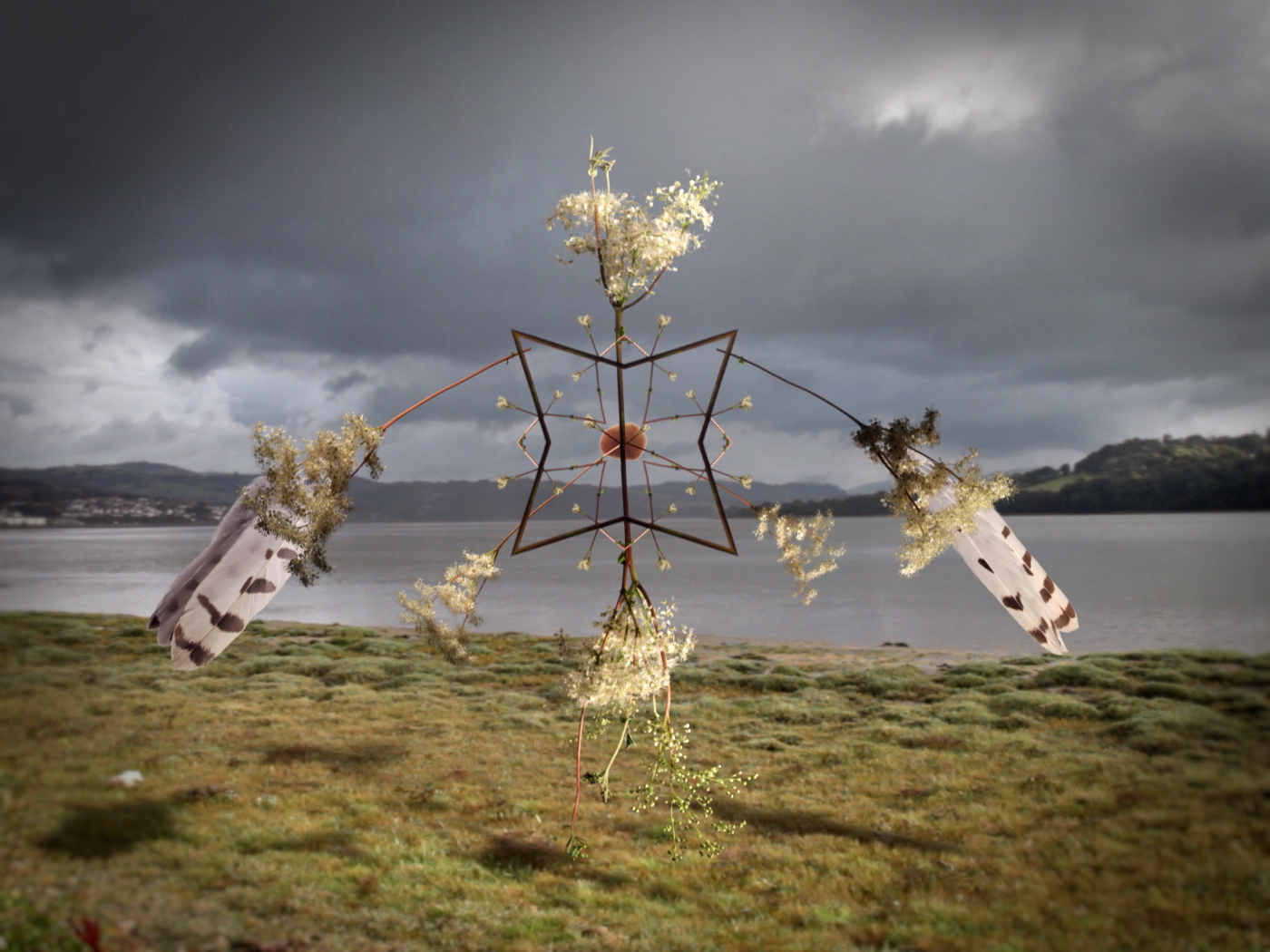